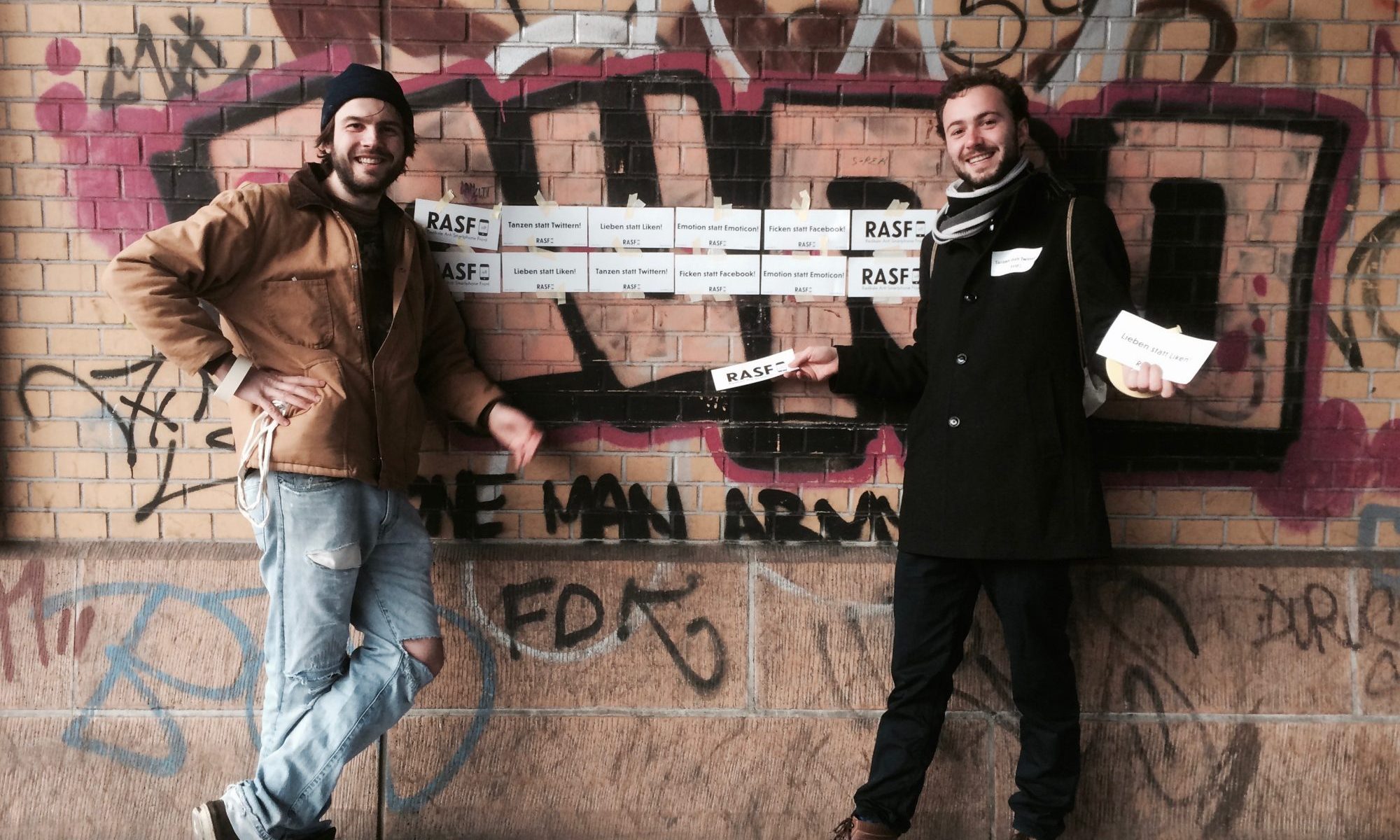 The innovation of smartphones and digital media affect our lives like no other innovation in past centuries. This evolution has let us navigate to the most remote places, access unlimited knowledge from search engines, and stay connected with friends around the world. However, with the exponential increase of app development we don´t question if all these solutions truly improve our quality of life. Interpersonal communication is dying due to cat videos and mindless feeds of internet junk. Social media popularity is based of likes and views, consequently we post false self-representations of our lives hiding true emotions, furthermore transforming our existence into fake reality. We need to decide whether this fake reality is healthy for society. We, the Radical Anti Smartphone Front frankly state: NO! No to ignoring present company in favor of digital conversation, no to narcissistic self-depiction and no to the further divergence of our society! And, very clearly, we say NO to the excessive use of the smartphones that bit by bit intoxicate our social lives. Instead, we say YES to everything that really matters: friendship, freedom, love and social cohesion. Fun without Facebook! Love without likes! Emotions without emoticons! We are the Radical Anti Smartphone Front!

We believe that true friends with whom we can laugh, cry and discuss the important things of life are more important than uncountable followers on social media. It concerns us that more and more we see people polishing their profiles for others which they never truly care for. We understand how social networks can keep us closer to friends across long distances, however, it is important to notice the crucial difference between quantity and quality in terms of friendship. We can text our friends in Amsterdam, New York, Hoyerswerda and Buxtehude at any time using WhatsApp, but we might not realize that we aren’t paying attention to our direct environment and those around us. Researchers at the “Mental Balance” project found smartphone users turned on their device on average 88 times per day, of which 35 times, date and newsfeeds were checked and the remaining 53 times were used to surf, chat or use other Apps. The participants of the project checked their smartphones every 18 minutes while awake, and spent an average of  2.5 hours per day using them. Within those 2.5 hours only 7 minutes were used for phone calls. No matter whether in a restaurant, at a bar or while having sex, everyone finds it disturbing sometimes if friends or family members use their smartphones excessively. According to a study by W3B, 74% of all internet users say that daily life is more pleasant if people turn off their smartphones every once in a while. We believe it is more important to live in the moment, here and now, with those physically around us rather than broadcasting worldwide by twiddling our thumbs.

The permanent distraction and quest for entertainment further leads to the absence of boredom, which can have fatal consequences. No matter whether WhatsApp messages, news, football results, the latest style trends or conspiracy theories, our attention is constantly required. As soon as we are confronted with a surge of boredom, we routinely grab into our pockets to get out our smartphones, to read something we will have forgotten after five more minutes. As such, we observe the life of others passively instead of being attentive, taking action and responsibility. This solution to boredom is destructive, we believe creative or constructive activities, self reflection and individual thought are weakened are tossed to the side because scrolling a smartphone is much easier.

Moreover, our real lives are downgraded to window shopping and our world becomes a shopping mall, in which everyone presents their goods – but there seem to be no purchasers around. The currency of that world are LIKES. You can buy nothing with it in the real world, but most digital natives have a higher preference for many Likes under their social media posts than for tradeable status symbols. Likes implicate attention and appreciation for us and our achievements. They define our social status, our well-being, and become a serious addiction in some cases. Too many of us get sweaty hands as soon as the smartphone’s battery is low and no charger is in sight.

There is serious competition in the currency of Likes, where the hustle for attention determines our actions. Considering tourist hotspots raises the question of whether people make holidays to take photos of what they have experienced, or whether they experience something in order to document it. The most important tool on the quest of Likes is multimedia self-depiction at all possible fronts. However, if the medial life account replaces the real life, fatal consequences arise for single individuals and for the society as whole.

Especially young people suffer from high assimilation pressures due to social media, which can lead to serious psychological problems. According to the RKI, the share of young girls with eating disorders has increased from 20% to 35% in the last 5 years. The hashtag #fitness offers more than 100 million Instagram pictures of boys and girls documenting their path towards perfectly thin and trained bodies. The flood of selfies along with Heidi Klum’s Hungerhaken principle hits the younger generation just like gateway drugs do, and this drug has long lasting consequences.

Smartphones create personalized digital bubbles for each user, which lead to a fragmented public and a society that is more and more polarized. Nowadays, most internet users obtain their information from digital media, especially via smartphones. However, on webpages we only find what we are explicitly searching for, and we will rarely come across contents from which we didn’t know they could be of our interest. We tend to read articles that agree with our positions instead of challenging them. On social media platforms, our newsfeeds are filled with posts we statistically like, and the public that evolves from these digital bubbles is characterized by uniformity rather than diversity. When internet activist Tom Steinberg searched for people on his timeline who were in support of Brexit, he found no one. However, 52% of British citizens wanted the UK to leave the EU. Public discourse needs exchange of views and ideas, and the latter take place less with the use of social media.

The echo chambers we build lead to a decreasing tolerance towards people with other opinions, and increases the aggressiveness inside the political discourse. The inflationary use of the notion Lügenpresse expresses this fact pretty well: for many people with right sentiments mainstream media coverage is not consistent with their (extremist) virtual reality content in social networks. A person that is against the accommodation of refugees will most likely only see posts with the same opinion in his or her newsfeed, since many of their friends will share this opinion. From this view, reports about positive examples of refugee integration can only be propaganda by the government. That being said, left-wing liberal communities tend to demonize AfD voters as general Nazis and to name and shame them on Facebook, instead of dealing with the real underlying confrontation.

The division of society caused by digital bubbles is especially predominant in the Western world and is well traceable in open debates. Ahead of the EU Referendum of Great Britain, whether to remain in or to leave the European Union, hateful disputes were held about the pros and cons. Within this election, wrong information was deliberately spread. In remote subgroups on Facebook, lies could be interpreted as real facts. The political tone became harsher, and the subsequent mud battle led to the assassination of Labor MP Jo Cox by a British Nationalist.

The US election was characterized by hate speeches and personal offenses between the political opponents, instead of honest talk about the future of a country worthy of proper democracy. Especially self-proclaimed media professional Donald Trump has used lies for political means, because he understood that in a world flooded by tons of media images real facts become obsolete.

Furthermore, due to the excessive use of smartphones, our lives and actions are more and more determined by algorithms, which, in the short- or long-run, undermine our free will and eventually lead to the total commercial exploitation of mankind. Whether for flirting, health, navigation, music, communication, holidays, or books – by now, there is no sphere in life that could not be optimized by another App. Even condoms can be bought with one click at Amazon Push. This seems to be convenient. However, corporations therefore know how often we have sex, to which clubs we go, with whom we are secretly in love with, whether we are overweight, have diseases, which books we read and which music we like. Detailed reports on our purchasing behaviour know more about us than we do. Forecasting our behaviour is a piece of pie when incredible amounts of data are used.

The philosopher Byung-Chul Han of the Berlin University of the Arts argues strongly that Big Data is an efficient psycho-political instrument that can be used to manipulate humans like spineless puppets. Big Data generates the concentrated knowledge for the powerful. It allows corporations to interfere in our psyche without us realizing it. If this development is to be continued, humans are consequently downgraded to quantifiable, controllable objects. They become slaves driven by strange unknown powers, who voluntarily sacrifice their freedom on the altar of digital self-optimization before burying it with their own hands – until life is all about communication, commercialism and consumption.

The Radical Anti Smartphone Front takes the position against this development, because satisfied slaves are the most severe enemies of freedom. We do not want George Orwell’s and Aldous Huxley’s gloomy and dusky dystopias to become true. However, we are already being monitored by the authorities like in “1984”, e.g. by the NSA, and we are equally trapped in total entertainment as set out in “Brave New World”. Therefore, we ask you to be conscious, ask questions, turn to the real world out there, to enjoy life in a real community, and to not get lost in a perfect digital simulation. Listen to your heart not your phone.